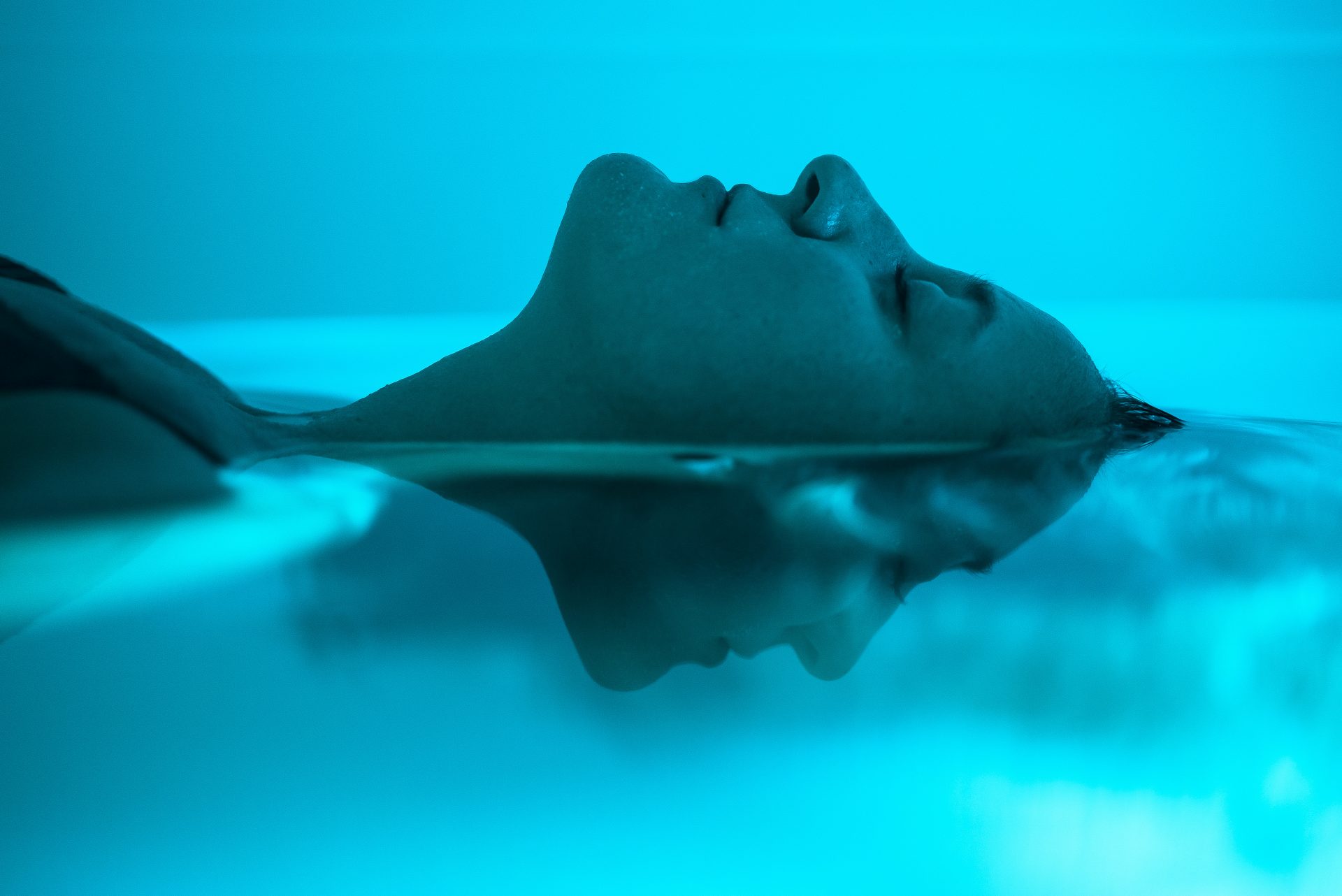 An Introduction to Floatation Therapy

A floatation tank, also known as an isolation tank or sensory deprivation tank, is a zero-gravity environment designed to help your mind and body relax, recover, and reset. When begin your floatation therapy session, you’ll enter a clean and serene environment that eliminates all external stimuli. The Epsom salt solution (1,000 pounds of magnesium sulfate mixed into water) makes your body extremely buoyant, and the water is kept at 94 degrees, mimicking the temperature of your skin. So, after you close the door, turn out the lights, and begin to effortlessly float, you’ll be entering a new state of being.

No light. No noise. Pure nothing. No longer affected by the constant downward pull of gravity, your muscle tension will melt away, and you’ll lose track of where your body ends and the solution begins.

With that in mind, it’s no wonder that floatation therapy is rising in popularity. From athletes, to biohackers, to people battling a mental illness, to those who simply feel overwhelmed, everyone is recognizing the life-changing power of frequent floating.

While a variety of people and cultures have used sensory deprivation techniques throughout history, the idea of an isolation tank was not developed until 1954. Dr. John C. Lilly, a physician with a specialty in experimental neurophysiology, was attempting to develop a research instrument that would help him study the processes of the brain and mind without damaging it. Believing he could examine the origins of consciousness by isolating the brain from external stimuli, he converted a soundproof tank at the National Institute of Mental Health into the world’s first float tank.

While testing his new tank, he discovered that not only was floating incredibly relaxing, but it could unlock new states of inner experience. His test subjects did not fall into a comatose state as he’d expected, but instead became intensely calm and relaxed. Some even reported experiences of self-realization and personal discovery. Lilly was intrigued.

Lilly is commonly known as the originator of the sensory deprivation tank, but it was two of his subjects, Glen and Lee Perry who invented the modern float tank. Their company was named Samadhi after the 8th chakra, which is above your crown and signifies enlightenment. Hoping to bring the benefits of float therapy to the general public, the Perrys opened their first float center in 1979 in Beverly Hills, CA, sparking a widespread interest.

Over the next few years, more float centers began to open around the globe as people realized that floating is a simple, natural way to relax, heal, de-stress, and reset. Following a drastic decline in popularity in the late 1980s and 90s, float therapy resurged in popularity in the 21st century.

More and more researchers have studied floatation, now also known as Restricted Environmental Stimulation Therapy (R.E.S.T.), to further understand the many benefits enjoyed by those who practice it. Float tank manufacturers have expanded and begun offering more options. There are international conferences every year where people from around the world gather to share cutting edge information and inspire the community. The number of float centers is at an all time high, and we are excited to be at the forefront of the industry in South Florida and beyond.

So How Does Floatation Therapy Work?

You might not notice it, but even when you’re just sitting on the couch or lying in bed, your brain is actually processing a lot of information. Scientists estimate that 90 percent of the brain’s regular workload is spent responding to natural environmental factors, such as gravity, sound, temperature, and light. Because of this, our sense organs are constantly active, remaining in continuous conversation with these external stimuli.

Our float tanks are designed to quiet that constant input, limiting environmental stimulation and allowing your musculoskeletal and nervous systems to relax. As it turns out, when you clear up the traffic jam of sensory information normally clogging your neural pathways, your mind and body start to do some amazing things.

One of the most powerful effects of floating on the mind is its ability to induce what’s called a theta state. The level of electrical activity in the brain normally hovers between 20-25 Hz, but electroencephalogram (EEG) measurements on floaters typically show a sharp drop down to 4-8 Hz, a slower rhythm that results in this dream-like state.

A wondrous mode of consciousness, the theta state is where our deepest learning and imaginative processes exist. Liberated from its usual task of processing external information, your mind is free to explore zones of higher-level learning, enhanced creativity, and powerful visualization. The theta state is normally only achievable through sleep or deep meditation, but the float tank allows you to slip into it effortlessly. Throughout your float, you’ll remain in this pre-sleep stage of consciousness, dreamily attentive to your mind’s journey.

Floatation therapy also improves cognitive function by promoting synchronicity between the two halves of your brain. While the “right-brain” focuses on creative thinking and big-picture ideas, the “left-brain” is more logical and analytical. Typically, the left-brain functionality is more active and dominant, but EEG measurements on floaters reveal greater balance and cooperation between the two hemispheres. By opening up those lines of communication, floating helps your brain unlock greater cognitive potential and achieve deeper levels of learning.

Many of the physical benefits of floating are caused by the activation of the parasympathetic nervous system. Normally employed during periods of deep relaxation, the parasympathetic nervous system is the body’s natural mechanism for healing and revitalization. Floating is the easiest way to elicit this response and enjoy its health benefits, which include a drop in blood pressure, muscle tension, and heart rate. During this process, your blood vessels dilate, increasing the supply of oxygen and vital nutrients throughout your body. Additionally, this state of growth and regeneration resets your chemical balances, decreasing pain and improving your body’s resistance to illness and injury.

Floating also decreases levels of stress-related chemicals — such as cortisol and adrenaline — and replaces them with happiness-inducing dopamine and endorphins. Not only does this decrease stress, but it alleviates pain and depression, enhances learning and memory, boosts energy, and helps us to break out of negative thought patterns. It’s no wonder that floaters consistently report immediate feelings of joy and relaxation.

Finally, the very act of floating in our Epsom salt solution offers countless therapeutic benefits. Epsom salt, or magnesium sulfate, provides floaters with magnesium, the fourth most abundant mineral in the body and one that many people do not get enough of. Adequate magnesium levels can promote better sleep and stress reduction, reduce muscle soreness and facilitate recovery, alleviate chronic pain, exfoliate your skin, and add volume to your hair.

How Often Should You Float?

Although even first-time floaters will enjoy a pleasurable and enlightening experience, it’s important to remember that floating induces cumulative benefits. In other words, the more you float, the better you’ll feel. Float therapy is not a cure-all. Like meditation or yoga, it is a wellness practice, and as you practice, your mind and body will grow more comfortable in that space and begin to build on each experience. Every time you return to the float tank, you’ll learn more about yourself and understand how to best navigate that deep relaxation.

As with any practice, the frequency of your floats is a matter of personal preference. People feeling particularly overwhelmed in their personal or professional lives might elect to float once or twice a week, while others might be comfortable with scheduling floats around special events such as job interviews, final exams, illnesses, or pregnancies.

Whatever your individual situation, it’s easier to enjoy and appreciate life when you’re calm, relaxed, and happy. At Float8, that’s the sort of feeling our tanks provide.

Start With Our Intro3 Package

Float With A Friend Package